We made a trip out to Heroes Stadium on Sunday afternoon for a walk-thru planning meeting by the San Antonio 110 organization. They organize the annual 911 Memorial Climb event, normally at the Tower of Americas, but moved to this stadium instead. Why, you might ask? Covid-19 of course. Someone wisely decided that putting that many heavy breathing people in the same confined stairwell, was probably not the brightest idea in the world.

This year’s event will be at Heroes Stadium on the morning of 9/11 of course. The schedule calls for registration and setup before sunrise, with activities kicking off around 7am. Tight security is the name of the game in today’s post terrorist world, so all participants will be entering thru one gated area on the NW side of the stadium. Liability forms and health screenings are now a part of our daily lives, especially at a large event like this. Participants will be climbing the bleachers, with firefighters participating on one set and civilian participants climbing the other set of bleachers. 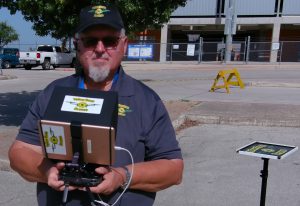 We’ll be there recording the event with our drones, for as long as the batteries last at least. The event is supposed to end before noon. They had a great bunch of folks on their organizing committee. Very organized and very friendly, especially to an outsider like us.  We are proud to be supporting an event like this one and plan on continuing support for this worthy organization at future events.
Previous
Next